How to have an authentic 19th century duel

Hi there! Are you looking for a new hobby? Something that combines the recherché charm of Russian roulette with the formal elegance of Boggle? Then duelling may be the thing for you.

[Note from legal team: The Telegraph would like to remind its readers that duelling is illegal, morally reprehensible and very silly. Furthermore, recent research has shown that receiving a bullet-wound to the head can prove detrimental to one’s health.]

The fifth episode of BBC One’s brooding historical drama Taboo begins with a duel between grizzled adventurer James Delaney (Tom Hardy) and hot-headed fop Thorne Geary (Jefferson Hall). They meet in a secluded spot, draw their pistols and agree to “a polite exchange of bullets”. It’s a nail-biting piece of television, and might well inspire a long-overdue comeback for this quaint pastime.

What could be better, in the age of Twitter-feuds, than an elegantly codified way of dealing with trolls? After one mocking emoji too many, a duel at dawn may seem like the best option. As Dr Johnson once told his biographer Boswell, “A man may shoot the man who invades his character, as he may shoot him who attempts to break into his house.”

Boswell’s son Alexander would surely have something to say about that: he died in 1822 after a duel with Whig politician James Stuart, about whom he had written an offensive poem. Stuart was tried for murder, but the jury let him off. They’d seen the poem.

There were 172 recorded duels in England in the reign of George III (1760-1820), but it tapered off in the mid-century. England’s last fatal duel took place in Surrey in 1852, and that hardly counted – both participants were French.

The 1820s were ‘peak duel’ for London hipsters. The craze reached everyone from lowly journalists to the aristocracy. In 1821 the editor of the London Magazine was killed in a duel, and in 1829 the Duke of Wellington took on the Earl of Winchelsea, after the Earl accused him of being soft on Catholics.

Taboo takes place a few years earlier, in 1814 – which is where we’re going. Join me now on a journey through time, back to the heyday of polite pistol-fire… Read the full article
Posted by Unknown at 20:00

How The Telegraph covered the great London smog of 1952

Today, parts of London are on a black alert for air pollution. Mayor Sadiq Khan has written a statment condemning the "the shameful state of London’s toxic air". But this isn't the first time the city has been shrouded in toxic smog... 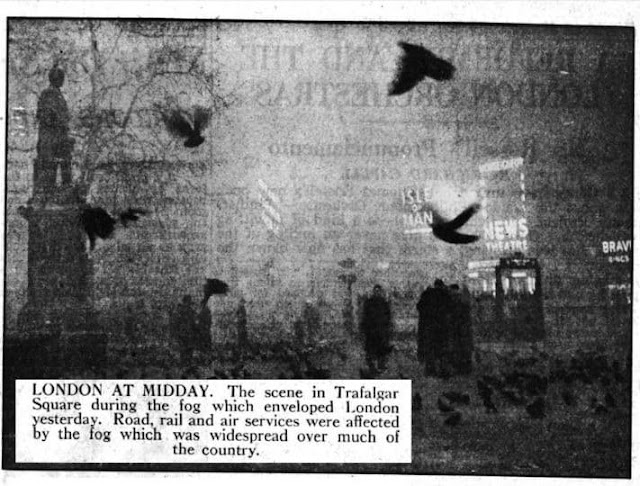 In December 1952, a dark haze covered London. The city was no stranger to pea-soupers, but this event was different: a lethal combination of airborne coal pollution and unusually cold, windless weather conditions. In later weeks, the government would estimate that 4,000 lives were brought to an early end by the smog. The real number of fatalities is now believed to be closer to 10,000.

But when the smog hit, London’s journalists were just as baffled about its true nature as the rest of the city. This is how the Telegraph reported the story as it happened... 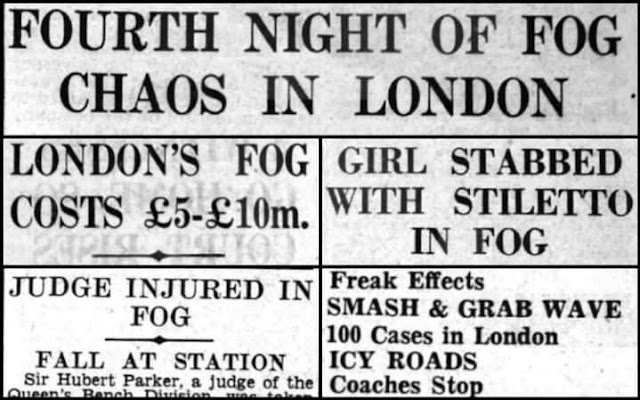 In a small front-page story, The Telegraph recorded a “thick fog which covered almost the whole of South-West London,” creating “almost a complete black-out” in Acton, Hammersmith and Kew.
“The fog appeared to be moving in towards the centre of London from this direction,” the report noted, ominously.

The smog had already claimed its first victim: “A mallard, presumably blinded by the fog, crashed into Mr John Maclean as he was walking home in Ifield Road, Fulham. Both were slightly injured. Mr Maclean handed the bird to the R.S.P.C.A.”

Headlines on other pages included “Women’s plea to bring back flogging” and “Ex-chauffeur sentenced to death.” Read the full article

TS Eliot Prize shortlist review: Is this a new golden age for poetry? 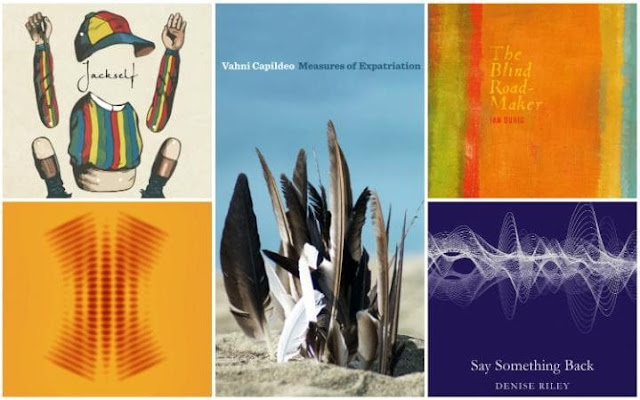 Last year, poetry books enjoyed their highest ever volume of sales. Geoffrey Hill’s observation that poems offer “a sad and angry consolation” may account, in part, for the spike as the world plunged further into uncertainty. But there was also the fact that a new generation of performers and web-savvy poets – including voices as varied as Rupi Kaur, Melissa Lee-Houghton and Kate Tempest – raised the profile of the genre. The Costa Poetry Prize shortlist included the last two of these names, indicating a willingness to embrace bold new directions. [...] Read the full article
Posted by Unknown at 18:00

Review: A Series of Unfortunate Events 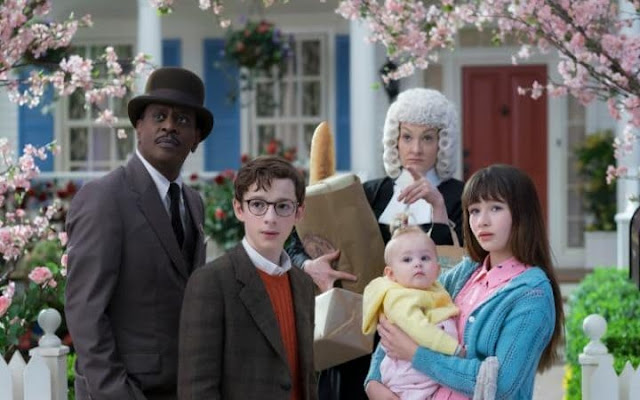 It’s strangely fitting that the first season of Netflix’s A Series of Unfortunate Events ends with the orphan heroes being whisked off to a boarding school. This world couldn't be further from Hogwarts. It is a world without magic, where all adults are either patronising bureaucrats or deranged arsonists. The few kind-hearted exceptions invariably end up dead. In other words, it’s an utter delight. [...] Read the full review
Posted by Unknown at 12:35 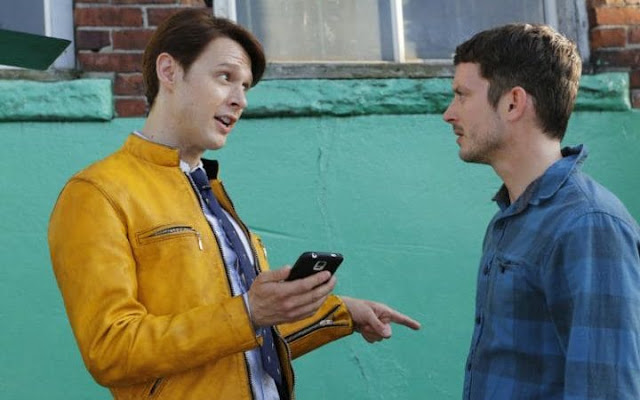 Douglas Adams once wrote a detailed explanation of how to tell the difference between Friday and a fried egg. Comparing Adams’s Dirk Gently novels to this new TV version feels equally absurd. It’s a compulsively watchable show, but its breathless, urgent tone brings it closer to E4’s Misfits than to anything Adams wrote.

Given the enduring success of Adams’s Hitchhiker’s Guide to the Galaxy (15 million books sold and counting), it’s only natural that producers keep returning to his equally funny, but less well-known, series about a penniless psychic detective.

Dirk Gently has already been played by Harry Enfield on the radio, and Stephen Mangan in a shortlived BBC Four show. Now, under the guidance of writer-producer Max Landis, it’s Samuel Barnett’s turn to fill his shoes, which he does with plenty of sub-Doctor Who arm-waving and chirpy enthusiasm. [...] Read the full review
Posted by Unknown at 11:41 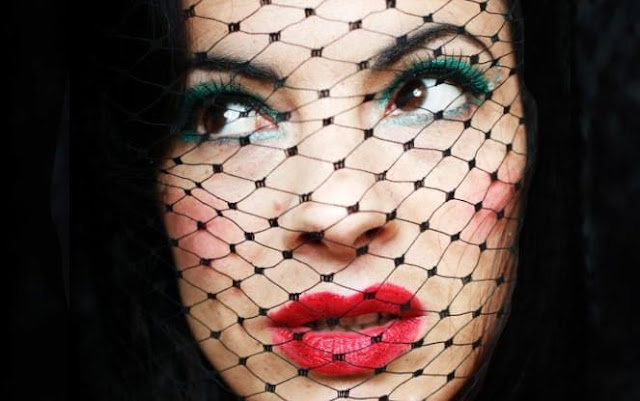 Before his concerts, the legendary Belgian singer-songwriter Jaques Brel would be physically sick with stage fright. No matter how often he performed, each appearance brought the same urgency, the same fear of failure as his first.

Camille O’Sullivan’s renditions of his music capture that sense of knife-edge tension. One of the UK cabaret scene's leading chanteuses, O’Sullivan made an abrupt career change from architect to torch singer in 1999, after a near-fatal car crash inspired her to start anew.

Her shows have since become an institution at the Edinburgh Fringe, re-imagining songs by David Bowie, Leonard Cohen, Tom Waits and Nick Cave. Those songwriters have a shared ancestor in Brel: in the Fifties, his lyrical chansons inspired a new generation of Anglophone singer-poets. [...] Read the full article
Posted by Unknown at 15:37

'Luke Cage is a black hero, not a hero who happens to be black’

"Hip-hop fans are geeks the same way any geeks are geeks,” grins Cheo Hodari Coker, the head writer for Marvel’s new superhero series Luke Cage. Coker is, unashamedly, a geek. One moment he’s rhapsodising about Wu-Tang Clan, and the next he’s quoting Bilbo Baggins or expounding the importance of Frank Miller and Chris Claremont’s 1982 Wolverine comics. Read the full article